Thinking through: Engaging with Postmodern Art as a Christian

Venturing into Postmodernism as a Christian can seem a daunting task, and although we do clearly need to tread with caution when dealing with certain aspects of Postmodernism, we needn’t fear it more than any other sphere of art history. As in all areas of the history and theory of art, there will be elements that we recognise value in, and areas that we observe with caution. However, perhaps more so than any other, we need to engage with this period of art history as its ideas continue to inform the contemporary arts today. Here we will have a look at some key ideas (though this is not a comprehensive guide) of Postmodernism and how we might consider them alongside our Christian faith.

Modernist ideas had dominated art through a series of ‘isms’ spanning the mid-19th to the mid-20th century. Each of the Modernist movements had sought to challenge the previous ‘ism’ and assert a new set of ideas and formal principles with a central concern for progress and utopian futures. Postmodernism emerged in the 1960s, critical of the idealistic Modernist faith in rationality, originality and progress. Postmodernism was sceptical of all big picture ‘metanarratives’ and systems of beliefs that tried to provide a total account of history and human experience, and in particular the authoritative claims and aesthetic certainties of Modernism. Postmodernism pushed back against the logical, structured and purist impulses of the Modernists, and so a new anti-authoritarian mood of rule breaking, playfulness, complexity, and subversion appeared within art.

One of the key features of the Postmodern movement was the collapsing of the boundary that the Modernists had erected between ‘art’ and ‘image’, or ‘art’ and the ‘everyday’. This impulse towards a formal purity and ‘art for arts sake’ had increasingly drawn art away from content or subject matter. The work of Postmodern artists such as Jeff Koons and Claes Oldenburg demonstrate an important shift away from such purity. These artists playfully challenged the use of the familiar large, domineering and formally ‘purist’ sculptures of the High Modernist artists, by introducing the use of ‘kitsch’ everyday imagery like cheap toy rabbits and shuttlecocks into art.

The possibility of the reproduction of images within an age of developing technology had further drawn art away from formal purity and towards an embrace of the ‘popular’. Photographic technology became more accessible and allowed images to be released from their original context and manipulated – undermining the originality and the specialness of the image.

The borrowing and reproduction of historical imagery unlocked a potential for the image to be recontextualized, subverted and appropriated. This created a fertile ground for Postmodernism, and also a gap within which religious iconography could emerge. However, in true Postmodern style, the images from the past were emptied of their prior significance and cracked open as references and symbols used to draw out new narratives and commentaries. A criticism of Postmodern art is often its shallow and superficial treatment of material. Just like Jeff Koons’ ‘Cracked Egg’ sculpture Postmodern art might be accused of having an attractive glossy surface, but a disappointingly hollow interior.

Alongside the collapsing of the boundary between the ‘high’ and the ‘low’ in art, similar principles of the democratisation of art and anti-elitism also expanded into a consideration of who art serves. Postmodernism began to carve out a more inclusive art that centred on those groups of individuals who had previously been alienated from the world of art. Artists such as Cindy Sherman explored fragmented and performative female identities, whilst artists such as Sonia Boyce and Kara Walker addressed issues of race and gender – challenging the stereotyped images of black women, subverting the common narratives dominant within the Western history of art.

The long-standing relationship between Western art and the Bible, as well as the central position of Christ in the Western imagination, meant that frequently this issue of marginalised identity, oppression, and suffering has been dealt with explicitly through the use of Christian iconography. The person of Christ himself within Postmodernism largely began to emerge as a symbol for the consideration of the ‘Other’ – those excluded, persecuted and outcast. Artists such as Ana Mendieta, in work such as Untitled (Self-Portrait with Blood) (1973) references the pained and bloodied figure of Christ to explore violence against women, sacrifice, rebirth and renewal.

It is the sacred nature of the treatment of religious images that often draws the most attention from Postmodernist artists – as images occupying such high status within art are a particularly tempting playground to enact the Postmodern disdain for the high/low cultural elitism and divide. One piece that interrogates such divides is Andres Serrano’s Piss Christ (1987). Serrano’s work references High Renaissance images depicting the Crucifixion that had been translated into cheap plastic objects. The image of the Crucifixion arouses a collective historic memory of the reverence of such icons. Serrano’s crucifixion however is submerged in his own urine. This caused incredible outcry from Christians and conservatives who felt that he was not treating the sacred image of Christ with the dignity it deserved.

It is often Postmodern images such as this that cause many Christians to believe that the Postmodern movement is particularly blasphemous. We are often taken aback at what seems to be a direct attack on the person of Christ. However, we need to be careful here of conflating the image of Christ with the reality of the person of Christ. God himself warns us of the danger of the idolatry of images.

There must be an objection to the idea that historic images of Christ that have appeared throughout Western art are devout and unproblematic. It is possible to argue that such images flatten and rephrase the Biblical narrative, and instead idolise the resultant images, overlooking the reality. For example, the repulsion felt by people as they see an image of Christ submerged in urine, as in Piss Christ, misses the point. Christ’s crucifixion was real and bodily, it was not neat or elegant, it was obscene, abusive and profane – a place where the Highest One was brought low. Perhaps Postmodern art opens up an opportunity to consider these nuanced realities of the Gospel narrative in a richer way than was possible before.

So, what does Postmodernism help us to learn? Some pointers.

Within Postmodernism a dialogue begins to re-emerge between art and life, opening up opportunities for the re-introduction of explicit references to Christianity into the now secular space of art.

Postmodern art can be commended for embracing the complex reality of humanity by opening a platform for the experiences of all to be seen in art. As Christians we ought to be the first to recognise the central importance of acknowledging the equality, value and worth of every human being – embracing and listening to every member of society as Christ did. We therefore can celebrate the Postmodern rejection of exclusivity, and the rise of previously alienated voices.

Postmodern art has opened a door to an art that embraces the everyday realities of the human experience. Through this door we now as contemporary artists have the freedom to use material and subject matter that was disregarded during High Modernism. Such freedom has resulted in an incredibly wide range of themes and ideas that can now be explored. Yes, Postmodernism may have rendered artworks that earnestly try to represent a single narrative, or serve a specific religious agenda, as ‘kitsch’ – but this should not cause us to believe that we can not produce artworks that are faithful to God in Post-Postmodernist art. The Bible is full of a wealth of complex themes and concepts that we can meditate upon and speak of in a way that points to God – themes of sacrifice, suffering, love, and humanity to name a few.

However, one word of caution as we consider the Postmodern movement. As Christians we know that the Bible is far more than merely a series of empty themes and symbols to be recontextualised for the purpose of serving contemporary issues. In Postmodern art we can identify a certain superficiality – where content floats on the surface and can not offer a secure place to help us to fully understand our experience as human beings. We therefore ought to remain rooted in our conviction of the truth of the whole Bible as a story of humanity’s fall, redemption and resurrection and the hope and security only found through Christ. 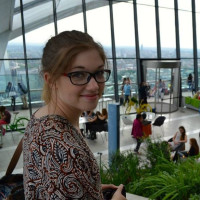 Rebecca graduated with a BA in Fine Art from Cardiff School of Art and Design. She has been a UCCF Associate Staff Worker for the Arts Network for several years and is currently working as a Ministry …

View all resources by Rebecca Nunes