Works of Love: Let’s be Real

Over ten years ago James Elkins wrote the book the ‘Strange Place of Religion in Contemporary Art’. He argued that artists who were genuine believing Christians could not make work about their faith within the contemporary art world because the art world would not accept it.

Why? Because, when making work about one’s own beliefs, about the things one loved, Elkins argued, the work produced was too sincere, sentimental, and subjective: standing - perhaps unconsciously - in complete opposition to the very foundations of modernism.

Whilst much of Elkin’s assertions are still true, I want to argue that the need for irony and the rejection of the sentimental or sincere, are being contested.

My argument is that the landscape of the contemporary art world today, is very different to that which Elkin’s described fourteen years ago, and that this could have profound opportunities for Christians working in the arts today to speak about the things that we love: of the personal and the subjective. How we do that well and with critical relevance is another question (one that needs serious consideration), but I do believe that - primarily thanks to a trajectory of cultural studies, feminist theory and queer theory - a contemporary space for the personal, the vulnerable, and even the sentimental, has been opened to us.

Rita Felski, in her book ‘The Limits of Critique’, argues that ‘feminists were among the first critics to emphasise the affective dimensions of interpretation: to talk about reading (about art) as an embodied practice’. You do not need to go far into feminist writing to verify this claim. Eve Sedgewick's essays are inextricably bound with her own experience of cancer, Sophie Tamas’ writing on the auto-ethnographic voice writes directly in conversation with her experience of divorce, and a section in Peggy Phelan’s book ‘Mourning Sex’, moves seamlessly between analysing her experience of the corps de ballet, at the same time as discussing her own divorce from her husband. This is rigorous academic writing which is intrinsically tied to and worked out within painful lived experience. There is a blurry line of critical distance from one’sown experiences.

When I first wrote this article as a talk back in February it was off the back of a trip to America, in the wake of Trump’s presidency, and in the lingering aftermath of Brexit. I was interested in work by queer artists which was deeply vulnerable: wrestling with their specific experiences of trauma and anxiety.

My own experience of queer practice and theory (particularly performance based or that regarding the body) has been defined by a profound emphasis on and engagement with sincere emotion, pain and vulnerability, and also, interestingly, a longing for the communal, for relationship and intimacy. This call to vulnerability is particularly pertinent coming from and to people who have been rejected and discriminated against in society - who have felt that they have had to hide who they are. It is also a call to honesty - to authenticity - to be genuine about who you are.

However, I recently read ‘Why Queer Artists are Trading Anguish for Joy’. The premise: that the general freedom experienced now by queer people is resulting in a surge of figurative painting by queer artists which is deeply open and vulnerable, and which celebrates the intimate and personal moments of queer experience, relationships and domestic life. This is work which is unafraid to invoke sentimentality, nostalgia and sincerity.

For the past eight years I have had conversations with Christians in the arts about the frustration that the currency of the art world seems to be that of struggle, difficulty and trauma; that any work about joy, happiness, and freedom seems sickeningly naive and shallow, and jarringly out of place in the contemporary art. Finally, I wonder if there is a space being opened up, by queer artists, for us to speak of the ‘joys of life’.

Sarah White is working on a small publication with Morphe Arts which will explore these ideas in greater depth. 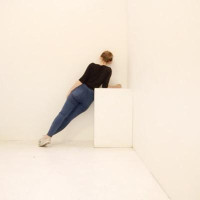 With training in both contemporary dance - elevate dance company - and fine art (BA), Sarah’s practice is continually informed by a dialogue between these two disciplines, centralising choreographic …

View all resources by Sarah White